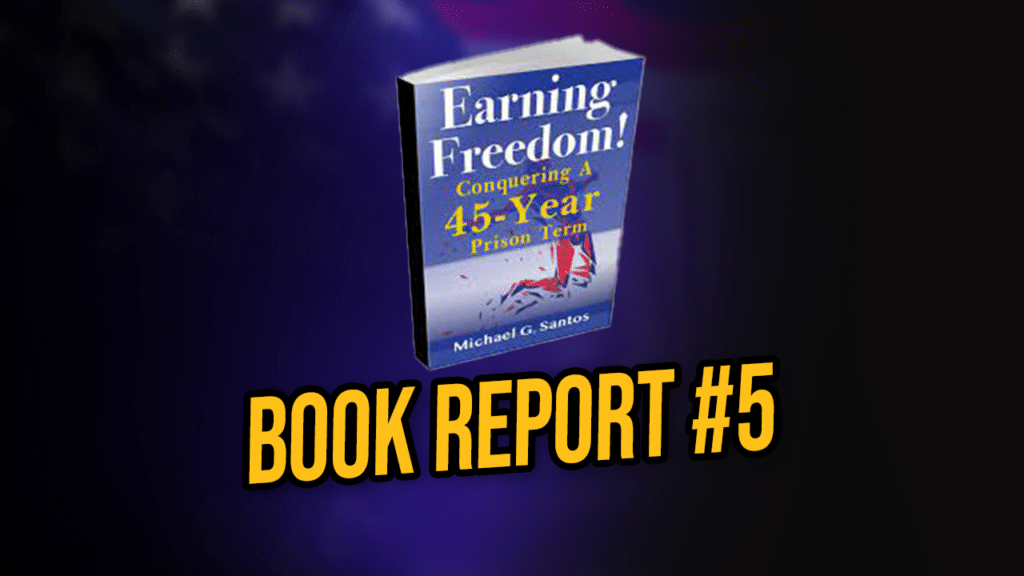 I finished this book on July 5th, having read it in 3 days but spending an equal amount of time pondering as I did reading.  I will be thinking about this book and the lessons I learned frequently.  Initially, I was intimidated by the length, but the author has a very compelling story to tell after serving 9,500 days in custody and I have no excuses – it is relevant to my life and I definitely have the time.  The book was a very enjoyable and inspiring read, so much so that I ended up staying awake until Midnight last night as I found myself unable to put it down.  I also chose this book because prior to reporting to prison I came across the work of Michael Santos and like most people who have seen his videos or read his writing, I was immensely impressed with the body of work he has compiled and the insights he shares.  It felt right to learn more about the story of the person whose lessons and content put me on a path of better preparing for the journey I am working through.

Thinking of a 45-year prison term would lead one to believe this is a heart wrenching story, and it is but only to a small degree.  Any prison term of that length is unfathomable.  However, instead of wallowing in despair the author is uplifting, determined, and harder working than anyone I know.  Early on in the book he makes the statement that “the decisions you make today will dictate where you stand in the months, years and decades ahead.”  That stops me in my tracks for two reasons.  First, I would have likely written it as “weeks, months, and years ahead” but he was facing a multi-decade prison sentence.  Second, thinking like that, in terms of not just the near-term future but the long-term future, is indisputably an intelligent thing to do and also very rare.

At one point midway through, Santos writes about how prisoners are sent to prison as a punishment for their crimes, and there is no benefit to punishing them further by creating an oppressive environment.  You are without your family, your loved ones, without liberty and that is enough.  This makes me ponder – I cannot change prison policy, I am unable to control what rules I have to live by while here.  I can, however, fully appreciate the benefits we are given here and also choose to not complain or be bothered by rules I feel are overly restrictive.  So as an inmate I have the power to create such an atmosphere for myself, that being one which is the opposite of an oppressive environment.  The way I can choose to not be punished any further is avoid disciplinary infractions, appreciate the benefits we have, disregard what I think of as “unfair” and make the absolute most of my time here.  These are key tenants of the philosophy that lead the author on such a successful path.

According to Michael, anyone can serve time in prison.  The challenge is to serve it in a way that will make you emerge stronger than when you started, to spend every day working to prepare for what is ahead, and be the captain of your own ship.  I will carry this advice with me every day.  While some inmates may choose to complain about their time here, I will spend my sentence in a more wise manner, working diligently to prepare for my eventual release.

Inmates should not spend much, if any, time thinking about how badly they simply want out of prison.  Time will pass without one’s effort or thought – that is the essence of how time works.  A minute is a minute, a day a day.  But preparing for your release and the life that awaits you takes work – a lot of it.  Eventually, your release will come and without putting in the effort to prepare inmates will enter the free world with an entirely new set of problems – ones they had the time to address while incarcerated. They owe it to themselves, their loved ones, and in the face of a system that has such a high recidivism rate, to put in the effort to come out ready to excel.

How do I define success as a prisoner?  I have written the following on a piece of paper and I keep it in my locker: What actions am I taking and what course have I put myself on so that I will emerge from this with the best possible outcome.  This isn’t just a long term thought but something to contemplate daily.  It is a tricky question because what comes first, the chicken or the egg?  I need to define what my best possible outcome is.  But I can also start by simply taking positive actions, the more of which I take, the greater the likelihood of a positive outcome.  That back and forth of increasingly good outcomes lifts me up and keeps me feeling strong.

Michaels separates his book into chapters based on the duration of his prison sentence, sometimes covering time spans of years in book.  He faced challenges far greater than what is in front of me.  Right when you think he must be knocked down for the last time, he gets up and puts in even more effort to continue moving forward.

He gets married in a prison visiting room and finds legal ways to support his wife and her child while incarcerated.  They build a family while he is behind bars.  His wife is just as committed to their relationship as he is – working on projects and taking on tasks he is unable to due to the restrictions of the prisons he is in.  When he gets transferred (which happens more times than I thought would be possible), they find ways for her to move as well.  This whole part of the book is an empowering and beautiful love story about a couple doing whatever it takes to not only sustain their relationship and love, but to grow more connected and, as is a common theme in the book, prepare for the future.

In the last chapter Michael talks about the final hours before his release and he asks himself, and the reader, a question “Why, I wonder, does society equate this particular amount of time (I have served) with justice? In what ways did the quarter century I served contribute to community safety.”  It is a heavy question that warrants much writing and thinking.  My current takeaway is that he does not dwell on this concept throughout the book, or I assume during the sentence he served, because he simply and consistently wakes up, plans, and executes on his plans. Every. Single. Day.

No matter what challenges we face in life we can learn lessons from emulating the attitude and determination that the author applies to his life and his struggles.  With the determination I have and the support system I am so grateful to have in place, my only excuse for not coming out of this stronger lies in my hands, and I plan to have no excuses when it is my time to walk out of Yankton FPC.