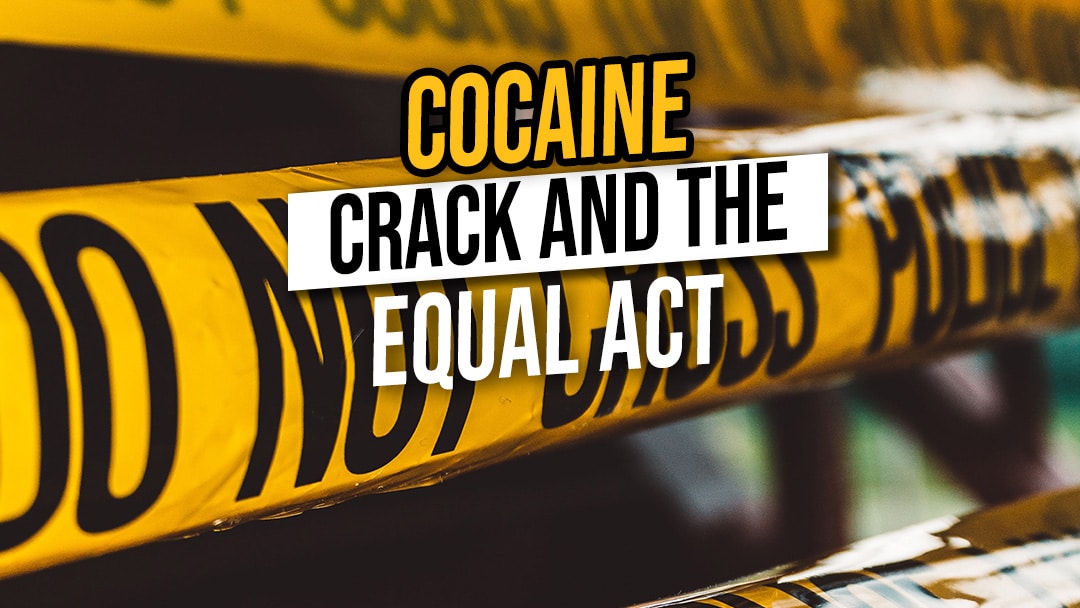 Cocaine, Crack and the EQUAL act

When it comes to incarceration, racial inequality shines through even more than in broader society. A glaring example of this is with crack cocaine prison sentences. In the 1980’s, Congress decided the US needed to get tough on drug crime. In a four year period, FBI anti-drug funding increased from $8 million to $95 million dollars. Over ten years, the Department of Defense anti-drug allocations went from $33 million to over $1 billion dollars. In the same time period, funding for agencies working on drug treatment, prevention and education was reduced from $274 million to $57 million.

In 1986 the Anti-Drug Abuse Act was passed, which imposed far harsher punishments for crack cocaine than powdered cocaine. Along with this, the media began to sensationalize the emergence of crack cocaine. At that time, all races of people across the US were using drugs at similar rates. People of color, however, were far more likely to be using, and sentenced to prison for, crack cocaine than white people, who predominately abused powdered cocaine. Furthermore, if you were caught selling 5 grams of crack you faced the same sentence as someone with 500 grams of cocaine. To put this on a larger scale, if you had 5 kilos (over 10 pounds) of cocaine you faced the same sentencing guidelines as a defendant with 50 grams (slightly more than one and a half ounces) of crack. The 100:1 powder-crack disparity came with no scientific or pharmacological basis. A societal fear of crack cocaine also deflected attention away from poverty and joblessness – some of the challenges we could have been focusing more on.

Almost 25 years later, in 2010, the Fair Sentencing Act was passed and it reduced that variance in new cases to 18:1. Still a large ratio and it did not apply retroactively. Had you been sentenced prior to 2010, you could not seek judicial relief for the otherwise shorter sentence you would have received had your offense occurred on or after 2010 or involved cocaine.

In 2018 Congress passed the First Step Act. This created, among many other benefits, the opportunity for those sentenced before 2010 to ask the courts to retroactively apply the 18:1 ratio to their 100:1 cases. It’s important to note that this is partially retroactive in that it is not automatically applied. The judge who sentenced the defendant needs to agree to the reduced sentence – a time and cost intensive proposition. The EQUAL act, if passed, will do what the name implies and make the ratio 1:1. Cocaine base (crack cocaine) and cocaine powder would be treated the same and the reduced guidelines also will apply to prior cases.

Move back in time to Clinton administration, when funding for public housing was decreased by 61% and boosted for prisons by 161%. In light of all these long sentences, prisons were becoming part of the nations housing plan for many black and poor drug users. Studies still show that people of all races use and sell illegal drugs at remarkably similar rates. I have to own that prior to coming to Yankton and partaking in the reading and discussions I have, that political rhetoric and the media I was exposed to had convinced me otherwise.

According to the Washington, DC Sentencing Project, and most any statistical source on race and prison, African Americans are incarcerated at grossly disproportionate rates compared to whites and Latinos. The reason lies in that the decision to wage the war on drugs occurred almost exclusively in poor communities of color and not affluent suburbs. Although the likelihood of success, assumed to be the arresting of drug users, dealers, and the removal of drugs from the street, would have been equal in most any neighborhood.

Furthering the issue is that many of those incarcerated, like Snake who I mention below, weren’t presented with anywhere near the same opportunities for employment or education as those who were not targeted. Most manufacturing/industry jobs left predominately blue collar towns when production industries moved overseas, leaving inner city residents with high unemployment rates and little to no economic opportunity. I’m not claiming either of the following scenarios are ‘okay’ from a societal standpoint, but which one is worse: selling drugs so your family can pay rent and has food to eat or selling drugs so you can fund your summer vacation plans?

When I was in my first of four Covid isolation/quarantines I decided on day twelve that I needed freshen up. I hadn’t shaved since arriving here, my hair was a mess, and I was in dire need of a self-esteem boost. I couldn’t go to the barber shop so I borrowed a pair of mustache scissors, which are extremely small blunt tipped, dull, safety scissors sold on commissary, and proceeded to cut my own hair. After years of watching barbers do it I had a general idea and the process went far better than anticipated, but I couldn’t cut the hair on the back of head or shave the back of my neck.

One of the other guys in quarantine with me had served 23 years on a distribution of crack cocaine charge. He went by the name of Snake and had violated the terms of his probation, which led him back to prison. Snake became a close confidant in quarantine. Always one for a discussion on any topic ranging from life to parenting to prison. Each morning, he would bring me his milk, which I would trade for the sugar packets included with my oatmeal. Interesting Snake fact: he fathered two children who were born on the exact same day but aren’t twins. They’re close friends to this day, family really, and he openly spoke about the pain of not being there for them.

He readily admitted to selling moderate amounts of crack on the streets of Chicago, but 23 years in prison? Everyone has his version of his own story, but in this instance, and the tale I was told, that length of time seemed excessive. Snake also readily admitted his willingness to assist with the role of barber. So there we are; it’s 9am and the sun is ‘shining’ through the five inch thick opaque security windows in the prison bathroom. Snake and I are cutting away while he’s sharing stories of spending over two decades incarcerated.

Snake’s story is similar to that of another close friend here. He started selling crack in the projects when he was 12 years old. His mother was unemployed and suffering from addiction issues. They needed a way to pay rent and put food on the table. He lived in what he calls the ghetto but we should first redefine what a ghetto actually is. Ghetto isn’t simply “a slum area of a large city inhabitated by a minority group who dwell there due to their social or economic state.” The concept of ghettos dates back to 70 A.D. during the Romans reconquering Palestine after a revolt by the Jewish people. The Romans segregated people and used ‘ghettos’ as a psychological tool in order to control and cause destruction. People were restricted to a certain living space, with limited resources and few opportunities to thrive.

A certain living space with limited resources and few opportunities to thrive…hmmm. Move forward to the 1980’s and the governments Federal Housing Administration subsidizing housing through the development of row houses and apartment complexes. These ghettos were heavily policed, involved almost no economic opportunity, and selling drugs was a means of attempting to make a living. Heavy policing, along with extremely high sentencing guidelines, resulted in the mass incarceration of countless African Americans. We segregated people into ghettos, provided no economic support to make an honest living, and then locked many of them up for comparatively long times when they did what people all over the country do.

In regard to drug crimes and Federal incarceration, all I can share is what I’ve seen, heard and discussed at one prison in one moment of time. With that being said, here is what I’ve seen in terms of sentence length and the drugs distributed.

Marijuana – to end up in Federal prison you need to be involved in a 100 to 1,000+ pound conspiracy, and it goes hand in hand with money laundering/tax fraud.

Methamphetamine – you’re going to prison for at least 5 years, on average 10, and 15 or more if guns are involved.

Heroin – 4 to 8 years depending on if you were transporting or selling.

Cocaine – 4 to 10 years but on average, slightly shorter sentences than with methamphetamine.

Crack – absolutely say goodbye to any semblance of your former life. No one at a minimum security facility has a life sentence, so I don’t meet those guys, but the cases for crack distribution involve 10 to life.

As a country, we can’t incarcerate our way out of social issues. It’s doesn’t work, yet the US continues to double down on an ineffective and expensive strategy. If the Senate passes the EQUAL act it will, on average, reduce sentences for crack cocaine offenses by 6 years and cut 67,000 years from prison sentences. 91% of those who will benefit are black.

The Senate has yet to vote on this and the bill needs at least 10 Republicans to come across the isle and provide support. One concern is, what happens when during election season an incumbent promotes an ad stating how the current Senator voted to let drug dealers out of prison early? As midterm elections near, Democrats fear looking soft on crime and this highlights one of the many issues of our political system – politicians doing what they can to stay in office vs. tackling social justice issues on behalf of their constituents, which is the manner in which they were elected to serve.