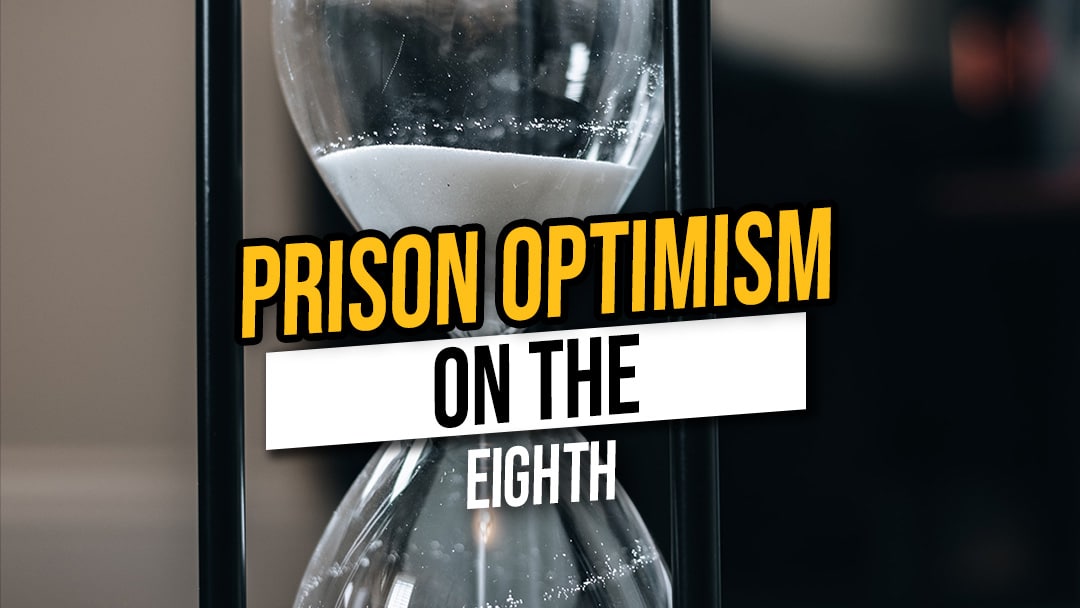 Prison Optimism on the Eighth

Fact of Prison: all inmates count down the weeks and months. Many more count down the years. Some I’m here with have been counting down the decades. Without fail, on the eighth day of every month, I hear my favorite snippet of prison optimism. “Only one more week and we’re halfway done with this month.” Nice.

Although it’s likely to begin with “oooohhh weee”, “okay bud”, “alright alright” or some variation of my most appreciated inmate vernacular.

Before I came here I was nervous about who I’d be spending time with. It wasn’t as much fear from a safety standpoint, but more so the idea that whatever people were here when I arrived were who I would be spending most every hour of every day with – there’s not much of an escape. You show up and are given a bed roll and a bunk assignment. Then you walk into the eight man room and find the seven guys you’re going to be waking up and falling asleep within mere feet from for the next however long. Were they going to be creepy, obnoxious, or sketchy?

The ironic part is, it’s the people who make this manageable. You have no idea who they will be, what they’ve been through, or who will walk through those doors next. The environment we’re all in is a fundamental aspect of our friendships. The flow of the days, the cramped quarters, the restrictions, the confinement. Going through it all together and having people to relate to adds a sense of dignity to it.

I can honestly say there are people here I will genuinely miss. People who’ve taught me a lot along the way. There’s a way to stay centered and present, to move through your days, to navigate the various personalities and interactions while remaining level headed. I’m glad I feel that way now, so I can appreciate the time we have left together, as absolutely bizarre as it is to say.

Stoicism applies to all aspects of life. It is water tight – nothing gets through, there are no exceptions. The ability to tame irrational thinking while remaining present is at the core of it. Chances to practice daily help. Most of the time we’re trapped in our thoughts about anything we’re in a mental prison of our own creation. The real tricky part, the one that makes it hard to escape, is we all have the key but at times we can’t quite slide it in the lock and turn.