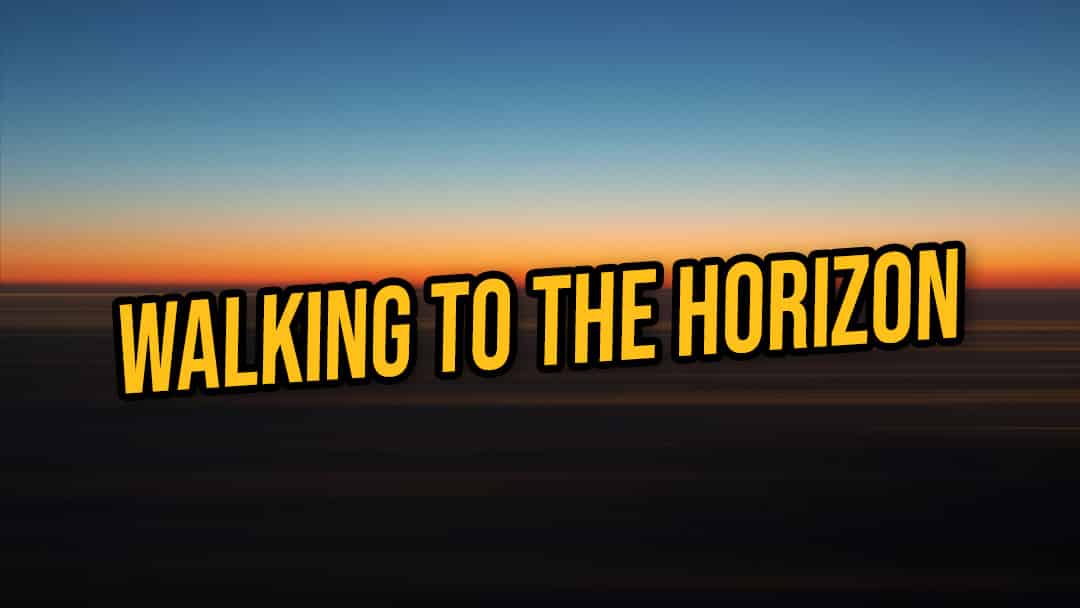 Walking to the Horizon

Prison fosters a training ground for learning how to be content. Incarceration requires experiencing concepts we may know to be accurate, even if they are challenging to live by and accept. I have written before about how happiness is a vague concept that people spend a lot of time chasing and, in the act of pursuing, find they cannot secure it entirely. In this regard, happiness is satisfaction and getting what you think you want. In reality, happiness is not always getting what you want but wanting what you have. In light of this, what happens when you can’t get what you want because there’s nothing more you’re able to have?

I don’t want a different job here. I don’t wish to have other clothes, socks or shoes. I don’t want a pay raise, although it would entail only an additional five cents per hour. I don’t want something other than baked fish on Fridays, even though I prefer an alternative. There’s not more to want because I’ve accepted that what we have is what we have, and wishing for it any other way is an exercise in resounding futility.

Further, what we do have can be abruptly taken away. On any given day, at any moment, the Warden could clear the compound with an emergency count. Then we’re in Covid lockdown for an undetermined amount of time, which is likely not communicated.

Last week FPC Yankton received tablets that inmates can buy through the commissary. We would be able to use them for email, playing games, and eventually renting pricey movies. Most county and state jails have had this technology for years, but it didn’t quite catch on in the Feds. I haven’t spent a moment wishing those tablets arrived earlier as that would have been ridiculous.

In a way, I’m also glad they weren’t here. It’s cliche, but I’ve liked being in a ‘society’ where short attention spans can glue no one to a screen. Equally so, I didn’t have the opportunity to be staring at one myself.

There’s a lapse, a flicker in time I can remember. When you’re sitting, standing, or waiting, boredom creeps in. You grab your phone with no intention or necessity and start to scroll. Each time we give in to that we cave, we exhibit a lack of control and self-restraint.

Beyond one’s mindset, everyone in prison has control over less rather than more. Of what we can control, one aspect I see frequently exercised is in regards to routines. The longer guys have been down, the more stringent they become. If I want to find certain friends here at exactly 5:30 pm on a weekday, I would know where to look, and they would be in precisely that spot.

Along with routines come personal policies. What one is disciplined with and what they will flex on. What they stick to and where there’s wiggle room. The routines are outward-facing. The personal policies are inward. While not a comprehensive list, what comes to mind includes the time I go to bed, reading daily, what I will not eat and oral hygiene.

The options for junk food are plentiful, and the creativity and sugar content could put a county fair to shame. So I don’t eat dessert at the chow hall, I don’t buy candy bars at the commissary, and I won’t eat peanut butter pie – although I appreciate the latter as both a culinary art form and a hustle. People ask me why I don’t give in occasionally.

Because giving in and the temporary satisfaction from eating poorly doesn’t feel as good as exercising self-restraint. There’s a satisfaction from abstaining; in this case, that satisfaction is not only the healthier option; it makes me happier. Short-term pleasure equals eating an 800-calorie slice of cheesecake fresh off the ice from a mop bucket. Long-term happiness is being able to say no to cheesecake while watching others enjoy it and then feeling good an hour later. Self-control is better than short-term pleasure. It is a pleasure.

Everything in life becomes easier when you decrease wanting. Understandably there’s resistance to that as there is a lot out there to enjoy. Here, it’s mostly in your mind because, as mentioned earlier, there is that much less to have. Greed and desire are the driving forces behind why humans engage in war, colonize far-off lands, and enslave other people. Almost all social atrocities point back to wanting more – more labor, more land, more profits because what some people have is not enough, and they want in addition to what they have. As a result, there’s little gratitude and much desire.

Ryan Holiday and Stephen Hanselman’s Book “The Daily Stoic” has a brief passage on contentment and the concept of conditional happiness. I’ll be happy when… They say it’s like attempting to walk to the horizon, and you’re never going to get any closer. I hear, “I’ll be happy when I leave this place.” “I’ll be happy when I can eat what I want, watch what I want on TV, when I don’t have to stand for the count, when I don’t have to sleep on a metal bunk bed,” As the book states, “locate that yearning for more, better, someday and see it for what it is: the enemy of your contentment.”

Opposite contentment, you have anger. Anger may not be pervasive here, but it makes appearances. You’ll hear, “this place makes me furious – I can’t stand the staff and their policies.” “They break so many rules that a third of them should be indicted.” “They don’t handle Covid the right way, and they don’t do this, that, or the other the way it should be done.” However, we never have the complete picture, and no matter how rational a complaint might be, none of it is in our control. There is a quote attributed to Marcus Aurelius, yet it comes from a play by Euripides. “You shouldn’t give circumstances the power to rouse anger, for they don’t care at all.”

In these situations, prison becomes a training ground for contentment. Want what you have and what is, instead of more. Find joy within self-control and restraint. Do not allow external factors to anger you. I’m a much more amenable person when I choose to be content with what I have and when I refuse to give circumstances the power to rouse me. Rough seas make for better sailors, but what about looking at the sea and thinking it’s calm enough?

These concepts are what I’ll have to use when I leave here. I will report to a residential re-entry center for an unknown amount of time and then spend additional time in home confinement. I’ve been given very little information on what to expect. I’m not sure how restrictive either will be. Some people say you can leave the house from 6 am-8 pm. Others say you only get two hours per day. The thing is, I’ll have to want what I have – which at that point will be freedom from prison and whatever stipulations are imposed upon me while finding joy in self-control and restraint.

It’s going to be restrictive, that’s the idea, but I don’t need to let exercising excessive self-control bring me down nor allow external factors to make me upset. All of these restrictions, whether they work well or not for my preferences and desired schedule, are out of my control, so I won’t be angry if I don’t like them. Take it full circle and want what is, knowing the bad parts won’t last forever.

In all fairness, I’m at a distinct advantage because having an unconditionally loving family and a wildly supportive community of friends helps immensely. Add on a sentence not measured in triple-digit months, and everything starts to shine. I didn’t come to Federal Prison like this, but if you don’t want the journey to chip away at your soul every day, it’s a path to take.